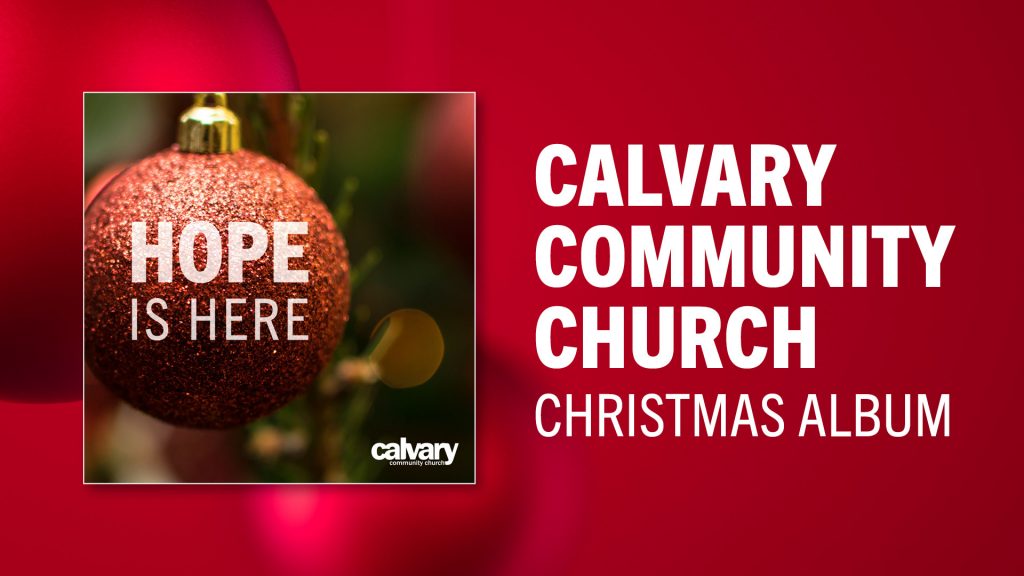 What Child Is This? (featured Kyleigh Thornton)

I Wonder As I Wander (featured Jacob Wood)

Find “Hope is Here” on your favorite platforms.

Tiffany Bradley is a singer, songwriter, cancer survivor, and law student from Chicago. She has two amazing children who remind her what unconditional love is. Tiffany believes in the healing power of music and hopes to sing around the world one day to help the broken heal.

Robby Browne is an east coast transplant living in California. Even though he has never had any formal training, music has always had a special place in his life. After becoming a Christian, he immediately began serving on worship teams, which led him to becoming a worship leader and eventually to Calvary.

John Coggins, born in San Diego and raised in Oklahoma, has been leading worship in the church since he was a teenager. He is also a published songwriter and successful music producer who has worked with many names of recognition in the music industry.

Megan Elyse is a Ventura County singer, songwriter, actress, and dancer. She started singing lessons young and has performed in many of Calvary’s Spotlight productions.

Scott Oatley has led worship at Calvary Community Church for over 16 years. He also sings for various film and TV projects in Hollywood as well as his own indie pop solo artist project, Vân Scott.

Michelle Pina is a classically trained singer and voice teacher from the Conejo Valley. She has called Calvary Community Church her home for the past 8 years and looks forward to many more years of serving.

Kyleigh Thornton loves being involved in music at Calvary Community Church. She hopes to use her passion for worship to lead others to Christ.

Michelle Tumes was born in Adelaide, South Australia. She learned classical piano at the age of four. That same year, she became a Christian in Malaysia where her family lived for a short time. Michelle signed a publishing contract with BMG/Universal at 19 and moved to Nashville. She wrote multiple songs for various artists before signing as an artist with EMI/Sparrow. She now serves as the Worship Director for Calvary Community Church.

Jacob Wood, a Ventura County native, has been leading worship full time for just under a decade. Jacob was born in a Christian home and baptized at 16. He has been pursuing Jesus and ministry with his gifts ever since.

A Special thank you to Brian Howard, Doug Lemen, Curtis Johnson, Mark Libby, Richelle Buchmiller, Doug Higgins, Brad Ritchie, Scott Weber, Courtney Lopez, Tracy King, and to all of the artists and musicians who worked on this album during this season. You are a blessing to our ministry.
Thank you to Calvary Community Church for the opportunity to share this collection of Christmas music with our community.

Thank you to our Heavenly Father for sending His Son Jesus, Who is our HOPE.